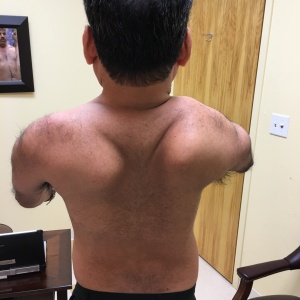 Figure 2. Scapular winging at rest
Scapular winging occurs when the scapula moves away from the chest wall during arm movement.(1-3) The two primary muscles responsible for stabilizing the scapula and preventing excess movement are the serratus anterior and the trapezius. With serratus anterior weakness, the scapula, particularly the vertebral border, juts backward primarily when the patient attempts to elevate the arms in front. With trapezius weakness, the winging is typically more obvious during shoulder abduction. Isolated serratus anterior weakness occurs with a long thoracic nerve lesion, isolated trapezius weakness with a spinal accessory lesion. In this patient with FSH, there was generalized periscapular muscle weakness; winging was present at rest and worsened with any arm motion.