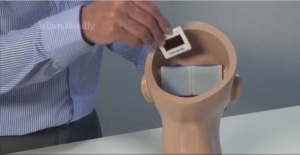 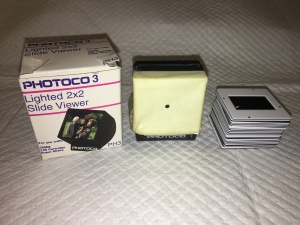 Figure 2. A simple, inexpensive fundus viewing trainer consisting of a 2 x 2 single slide viewer, a yellow sticky note and a collection of slides.

The recent article by Gupta, et al describes a device for training neurology residents in fundoscopy.(1) They showed that adding the use of this fundoscopy trainer was superior to a traditional lecture method alone. The simulation device is quite realistic. (Figure 1)

Some years ago, when I was extensively involved in teaching trainees and students, it became painfully obvious that even senior residents often were not able to do an adequate fundus examination. Medical students were nearly hopeless. The trainees often missed blatant abnormalities such as papilledema and optic atrophy, conditions a neurologist should be able to recognize. On more than one occasion, I was told by a medical student and once by a senior Internal Medicine resident, “Sir, I have never actually seen the disc.” Students sometimes did not know how to hold the ophthalmoscope and which hand to use.

In trying to address this problem I devised a poor man’s version of the fundoscopy trainer described in the article. It was cheap and effective. Vague plans to someday pursue commercialization never materialized. The device is described here in hopes others may find it useful.

The trainer is made of a simple, 2 x 2 single slide viewer. (Figure 2) These viewers are still available. Across the front of the viewer I taped a yellow sticky note with a hole punched in the middle. The size of the hole can be varied to make the experience more or less challenging. A sample of fundus slides is necessary. Finding slides is more difficult in the digital slide era but still possible. I would be happy to share my slide collection with any interested parties. The slides include varying degrees of papilledema and optic atrophy, obvious drusen, subtle drusen, retinal hemorrhages and other conditions.

With the slide inserted and illuminated, the trainee uses his or her own ophthalmoscope, light turned off, to view the "fundus" through the aperture in the sticky note. I would try to carve out an hour during each attending month to make fundus rounds. Using several viewers and a stack of slides, the trainees would examine the simulated fundus and render an opinion. After everyone had a chance, I would then put the slides on an x-ray viewbox, another antique item of medical equipment, and discuss the abnormalities.