From Neurosigns
Jump to: navigation, search
Vibratory sensation can be quantitated fairly simply by noting where the patient can perceive it and for how long, e.g., “absent at the great toes and first metatarsal heads, present for 5 seconds over the medial malleoli [128 Hz fork].” This is better than “mildly decreased.” A normal young adult should perceive vibration for at least 15 seconds at the great toe; this value decreases by about 1 second per decade. Perception for less than 10 seconds at the great toe is abnormal at any age. Since vibratory sensibility normally declines with age, a control of similar age, often the spouse, is helpful. Counting “one Mississippi” provides a semi-quantitative estimate. More precision requires manipulating both the tuning fork and a stopwatch.

The 64 Hz Rydel-Seiffer tuning fork (RSTF) provides a more quantitative assessment of vibratory sensation. There is a black and white display of two arrows and two sets of numbers from 2 to 8 (Figure). 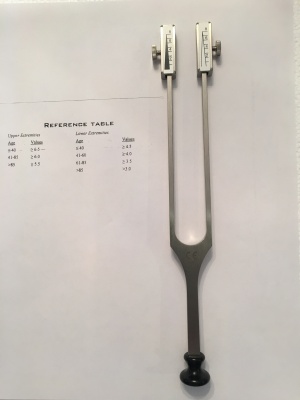 Rydel-Seiffer tuning fork
When the tines are set in motion, the numbers and arrows blur out (Video). As the vibrations attenuate, the display becomes readable and the intersection of the arrows points to progressively higher value numbers. The vibratory sensation is the number readable when the patient reports loss of the sensation. A chart provides reference values for various ages and for both upper and lower extremities. The RSTF is increasingly used in neuropathy research studies.

The RSTF method is no more time consuming than routine vibratory testing and and is less cumbersome than timed vibratory testing; some have suggested it replace traditional testing. The results correlate with QVT. In a series of 184 subjects, quantitative vibration testing with the RSTF correlated with the amplitude of the sural sensory nerve action potential.(3) Panosyan, et al reported a discrepancy between the readings of the black vs the white triangle and suggested greater accuracy is possible by darkening the white triangle with a marker, conforming to the original (1903) design featuring 2 black triangles.(4)