From Neurosigns
Jump to: navigation, search
Central demyelinating disorders, particularly MS, occasionally cause episodic or paroxysmal manifestations, such as attacks of ataxia, dysarthria or dystonia.(1-3) Painful tonic spasm is a paroxysmal dystonia causing stereotyped, usually painful, dystonic posturing usually lasting for one to several minutes. It occurs most often in MS but has been reported in NMO, Wilson’s disease, Sjrogen’s syndrome, SSPE, Behcet’s disease, post-stroke and as a medication side effect.(4,5) In MS, hyperventilation may precipitate attacks and a dramatic response to carbamazepine is characteristic. The proposed etiology is demyelination causing ectopic or ephaptic transmission.

The video shows a 63 y/o male with transverse myelitis who had a 3 week history of episodic spasms of the left arm and leg that came on acutely, lasted less than a minute, then entirely resolved. They were very painful, and consciousness was entirely normal. The episodes occurred several times a day. Exam showed mild hyperreflexia and an upgoing toe on the left. C-spine MRI showed a T2 hyperintensity at C5-6.(Figure) 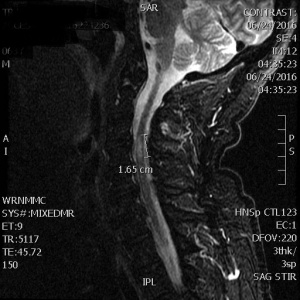