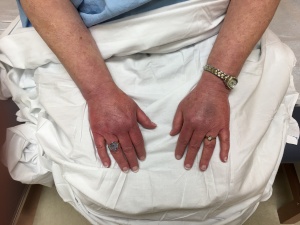 Erythromelalgia in a patient who presented with hand pain 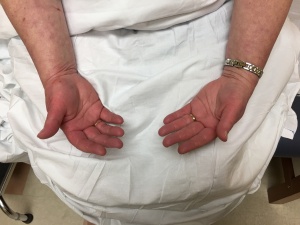 Erythromelalgia, palms
Erythromelalgia (Greek – erythros (red), melos (extremities) and algos (pain) is a condition characterized by episodes of redness, warmth and pain of the extremities. It was first described by S. Weir Mitchell in 1878 and sometimes referred to as Weir Mitchell disease. The lower extremities are involved more often than the uppers and the manifestations are typically bilateral and symmetric. Symptoms are usually provoked by exposure to warmth and lessened by cold. Patients may become very particular about footwear. Physical activity may also provoke an attack. During an episode, the involved parts become hot, intensely red or dusky purple and there is accompanying pain, often burning in character.

Erythromelalgia may occur either as a primary or secondary disorder. Some cases are associated with a mutation in a voltage-gated sodium channel protein gene. Primary erythromelalgia is caused by the genetic channelopathy. Secondary erythromelalgia can result from small fiber neuropathy and some autoimmune disorders. It may also arise as a complication of hematologic disorders, especially myeloproliferative diseases and in particular polycythemia vera. Differential diagnosis includes cellulitis, Raynaud’s phenomenon and vasculitis.

The patient shown in the figures was referred to the EMG laboratory for evaluation of hand pain. In this case, there was much less involvement of the feet.