Difference between revisions of "Pisa syndrome" 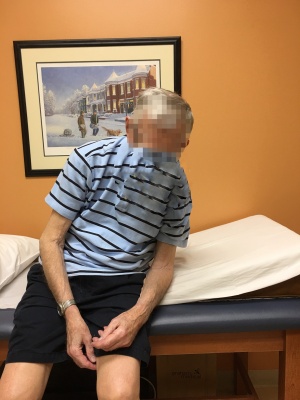 Patient with Parkinson's disease leaning left - Pisa syndrome
Pisa syndrome (sign) is a tonic, reversible, lateral flexion of the trunk causing the patient to lean to one side whenever erect.(1-4) It was originally described by Ekbom in 1972 as a dystonic reaction due to neuroleptic therapy, then other cases without neuroleptic exposure were later described. It was reported in patients with Parkinson's disease (PD) in 2003, and occurs with an estimated prevalence of 8.8%. Pisa syndrome also occurs in other parkinsonian syndromes, particularly MSA, and Pisa syndrome is one of the features suggestive of atypical parkinsonism.(4)

There are no consistent diagnostic criteria for Pisa syndrome , but an arbitrary cutoff of at least 10° of lateral flexion has been adopted in most investigations.(4) Drugs, including antiparkinsonian drugs, may induce Pisa syndrome. The pathophysiology remains poorly understood but the tendency to lean is associated with more severe motor involvement, combined treatment with levodopa and dopamine agonists, gait disorders, and such comorbidities as osteoporosis and arthrosis.(2) Pisa syndrome may come on either acutely or subacutely associated with medication adjustments, or gradually in a way that seems related to the evolution of the disease.(3) Either acute or subacute presentations seem to be pure abnormalities in the coronal plane and are usually reversible. A more chronic form may occur in association with camptocormia. The acute/subacute phenotype is the condition originally named Pisa syndrome.

Oliver Sacks discussed Pisa syndrome in the story On the Level in The Man Who Mistook His Wife for a Hat and Other Clinical Tales.(5)

This patient with PD tended to lean to the left (Figure).